UNIVAC is a static cohort model now based in R (and previously based in Excel). The model was originally developed to provide national ministries of health in low and middle income countries with conservative estimates of the impact and cost-effectiveness of routine Hib, rotavirus and pneumococcal vaccination. UNIVAC has also been used to provide Gavi with conservative estimates of the number of cases, deaths and Disability-Adjusted Life Years (DALYs) prevented by these vaccines over the period 2001-2030 in countries involved in WHO’s Global Vaccine Action Plan (GVAP).

The model tracks 30 stacked/successive cohorts from birth until death. Demographics are taken from the United Nations Population Division. Estimates of disease incidence and mortality are based on CHERG/MCEE estimates (Child Health Epidemiology Reference Group / Maternal Child Epidemiology Estimation). Disease age distributions are based on the literature and surveillance. Estimates of dose-specific coverage and vaccine timeliness are based on WUENIC, DHS and MICS data. Dose-specific vaccine efficacy and duration of protection assumptions are based on Cochrane/SAGE reports.

The Lives Saved Tool (LiST), developed by the Institute for International Programs at Johns Hopkins Bloomberg School of Public Health and funded by the Bill & Melinda Gates Foundation, is a multi-cause model that estimates the impact of scaling up more than 70 evidence-based health and nutrition interventions, including vaccines, on maternal mortality, neonatal mortality, child mortality, and stillbirths.

LiST has been characterized as a linear, mathematical model that is deterministic. LiST is a module in Spectrum, a software package maintained by Avenir Health, with links to the demography module (DemProj), AIDS impact module (AIM), and the family planning module (FamPlan). LiST has been used for over 10 years and is regularly updated to incorporate the latest evidence from the scientific literature and household survey data. LiST is free and publicly available for use. 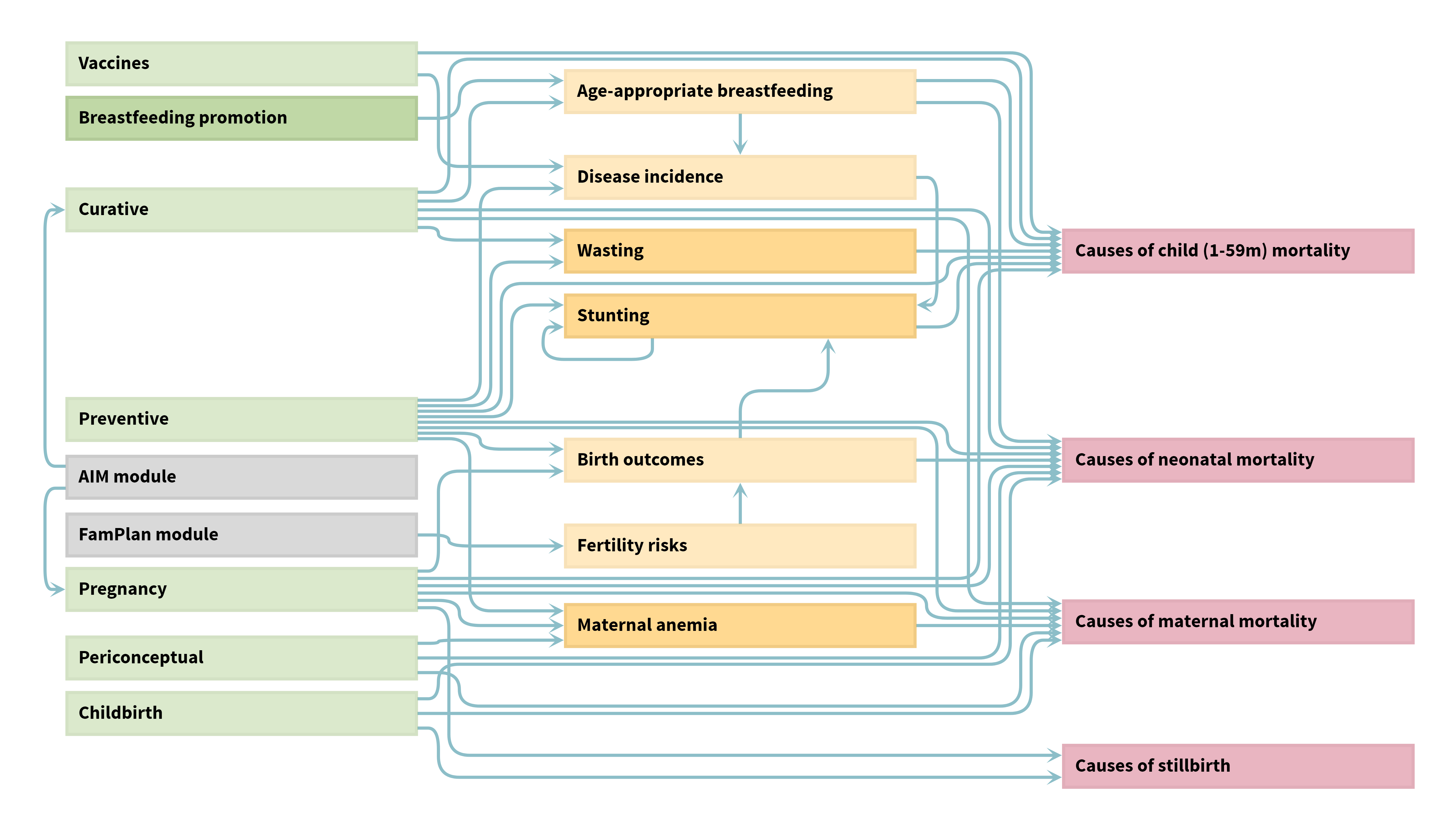 The Emory Rotavirus Vaccine Model uses a deterministic, age-structured compartmental model of rotavirus transmission and disease. The model follows a Susceptible–Infected–Recovered-Susceptible (SIRS) structure, with complexity added to capture rotavirus natural history. Infants are born into the model with maternal immunity. As maternal immunity wanes, infants become susceptible to a primary rotavirus infection, which has a certain probability of causing rotavirus gastroenteritis.

The model assumes previous infection confers protection against both subsequent rotavirus infections and disease. Primary infections are assumed to be more infectiousness than subsequent ones. The model assumes primary, secondary and tertiary infections have different probabilities for developing gastroenteritis for the probability that that disease is severe. It assumes that only severe rotavirus gastroenteritis cases progress to death. It assumes that vaccine-induced immunity is similar to natural immunity. Values and ranges for natural history parameters are informed by cohort and challenge studies.